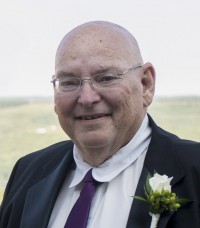 Douglas graduated from Glebe College Institute and later obtained his Master's Degree in English from McMaster University. He worked for the CBC Radio when he married his wife, Vickie and spent some time in Iqaulit, Northwest Territories. He was able to experience hunting and living with the Inuit community. He worked for Howmedica in Guelph, Ontario and was transferred to the global headquarters of the company in New Jersey in 1987. Through this job he traveled extensively, visiting most of Europe and then later spent time in Japan. Douglas retired in 2013 as the Director of Education with Three Rivers Orthopedic and Spine, Inc. He was an avid hockey fan, and enjoyed gardening, reading, and British crime dramas. He loved animals and will be greatly missed by his dogs and cats. All of them drove him crazy, but he loved them dearly.

His memory will be cherished by his son, Aydaen Lynch and wife, Corinne of Forest Hills; his daughter, Aylish Lynch and boyfriend, Damian Lynch of Kittanning; and his grandson, Nicholas Lynch. Douglas was also survived by his brothers, Robert Lynch and David Lynch both of Ottawa; and his sister, Shirley Lynch of Shawinigan, Quebec.

Services will be private.