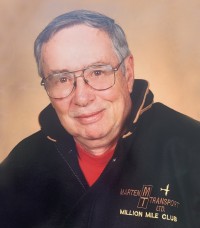 Jim spent most of his childhood on the family farm with his beloved grandmother Kitty and graduated from Dayton High School. He served in the U.S. Marines during the Vietnam conflict, where he received honors. Jim drove truck for many companies over the years and was a proud member of the million mile club, driving one million miles accident free. His cousin Cathryn Vander Sande later joined him as a driving partner and the two of them saw and photographed all the sites together before they both retired and returned home to be near family. He loved to hunt and enjoyed sharing this passion with his uncle Vern. He also liked to spend time in his vegetable garden, canning his homegrown vegetables, as well as Grandma Kitty's pickles. He will be lovingly remembered for his strength and the sacrifices he made for the people he loved.

James was preceded in death by his parents and second wife Tawny Sue Lightner.