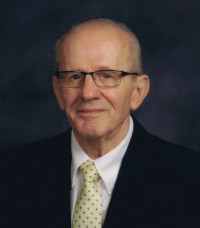 Sherman A. Wickline, 89, of Butler, formerly of Kittanning, passed away on Saturday, December 26, 2020 at New Haven Court at Clearview in Butler.

Sherman proudly served in the U.S. Army during the Korean conflict. He was a self-employed carpenter, well-known and respected for his carpentry skills. He was previously employed for many years at the Carpenter Shop at PPG in Ford City.

On November 24, 1950, Sherman married Irene at Elderton Presbyterian Church on a day that will never be forgotten because of the 3 feet of snow on the ground and the bitter cold weather. Together they enjoyed traveling, especially to Las Vegas and Aruba.

Sherman was preceded in death by his parents; his wife, Irene B. (Baker) Wickline, who passed away on Sept. 8, 2010; and two brothers, George Wickline, Jr and Harold Wickline.

At the family's request services will be private.

Burial will be at Kittanning Cemetery, Rayburn Twp., Pa.