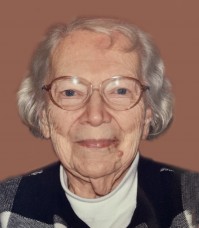 She was born January 30, 1918, in Donora, PA to the Rev. William Hershel Brown and Della Mae (Himelwright) Brown.

Before moving to Elderton in 1929, Esther spent her younger years in Donora, PA, Wellsville, OH and Sharon, PA. Her father was the former pastor of Elderton Lutheran Parish which included Gastown, Mt. Union and South Bend. The family lived in the parsonage in Elderton. She graduated from Elderton High School in 1936 and then attended Indiana Business College, receiving her Associate's degree in secretarial work.

Esther married Ira Miles Smith on June 15, 1938 and they had many wonderful years of marriage until his passing on January 30, 1967. At first they ran a family farm, but in the 1965 Miles and Esther were given the opportunity to purchase school buses from Miles' employer, Clair Thompson. This was the beginning of the Smith Bus Company, which is still owned by the family. For many years, Esther owned the bus company where she performed a variety of administrative duties.

Esther was a member of Mt. Union Lutheran Church where she taught Sunday school, sang in the choir and prepared the church bulletin for over 40 years. She also worked the local election polls. Esther was very involved with her children's school, serving on the PTA for many years and as the secretary for the Elderton School Board. She will be remembered for being a hard-worker and a god-fearing woman who always followed her faith.

Additional visitation will be from 10 AM until the time of funeral services at 11 AM on Monday, Aug. 3, 2020, at Mt. Union Lutheran Church, 1051 Girty Rd., Shelocta, with the Rev. Joyce Dix-Weiers officiating.