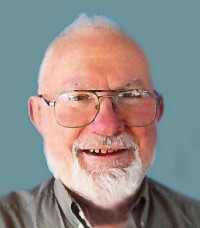 Bob was raised in Lawsonham and was a third generation Slagle in the Rimersburg area. In his younger years, he and his brother, Don, were key baseball players on the Lawsonham baseball team. He was the valedictorian of his class at Rimersburg High School, and went on to graduate with a degree in Forest Management from Penn State in 1958. In 2015, Bob was awarded the Penn State Mont Alto Distinguished Fellow Award for his professional achievements and service. Since his retirement from the U.S. Forest Service in 1991, Bob followed an eclectic mix of interests, including hunting, fishing, gardening, participating in both a reading group and a writing group, running, cross-country skiing, playing bridge, and riding his bicycle. He also closely followed Penn State football, as well as the Pittsburgh Steelers and the Boston Red Sox. He was a great story teller, and his intellect, curiosity, and enthusiasm will be greatly missed by family, friends, and neighbors.

His memory will be cherished by son, Brian E. Slagle of Grand Lake, CO; his daughter, Karen Selden and husband, David of Lyons, CO; and one brother, Donald R. Slagle and wife, Betty of Templeton, Pa.

He is preceded in death by his parents and his wife, Eleanor J. (Rumbaugh) Slagle.

The family will be received from 10 AM until the time of funeral services at 11 AM on Saturday, October 19, 2019 at the funeral home, with Pastor David Stough officiating.

A celebration of life will also be held in Plymouth, New Hampshire at a later date.