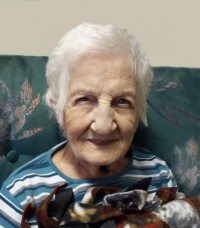 Kathryn lived most of her adult life in Dayton, PA. She was a member of the Glade Run Presbyterian Church. Kathryn held many jobs in her life, the last one working at the Dayton High School Cafeteria. She also worked on the election board for Dayton Boro for many years.

In her younger years, she enjoyed bowling, bus trips to the casinos, and playing cards with her friends.

Kathryn married Ross Rearick who preceded her in death on Aug. 29, 1963.

Her memory will be cherished by her children, Barbara (Thomas) Bryer of Harrisburg, James (Daisy) Rearick of Kirksville, MO, Linda (Richard) Wingard of Templeton, and Terri (Terry) Rogers of Pine, CO; eight grandchildren; and nine great-grandchildren.

Kathryn was preceded in death by her parents; her husband, and several brothers and one sister.

Friends and family will be received from 12 PM until the time of services at 3 PM on Friday, Dec. 3, 2021 at the Bauer-Bly Funeral Home, 125 East Main Street, Dayton, PA with officiating Rev. Sheila Wadding.