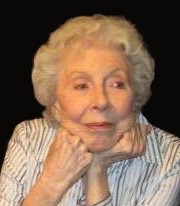 Born September 30, 1924, Beatrice "Bea" Imogene (Toy) Scheeren grew up as a part of the greatest generation. She was the daughter of the late Warren Everett and Ethel (Bowser) Toy. Times were tough but families were strong. As a 1942 Kittanning High School graduate, the country was still at war, and FDR was president. He got them through the depression with his radio Fire Side Chats, and the country pulled together with their Victory gardens and sacrifices.

Bea was a licensed beautician before attending Duff's Secretarial School and then went on to work for a local dentist. She would marry Thomas McConnell Scheeren in 1948. He survived 50 missions in Europe as a bombardier in World War II, and returned to the Ford City area where they met working at Schenley Distillery shortly after the war. They had their first born child - Thomas Frederick in 1950 and a daughter Lynda Suzanne in 1953 while residing in the East Liberty area. The family would soon move to Ford City where she would later become an important part of the family business - The Scheeren Agency, typing appraisals through the years.

For 60 years Bea called Campbell Hollow her home, and was a longtime member of The First Presbyterian Church of Ford City. She loved keeping a beautiful home, loved to read, was a talented seamstress and enjoyed making some of her own clothes.

Her passion, however, was oil painting. She was a gifted artist and won many awards. Portraits would become her specialty, and she painted portraits of family members for years. She even painted a portrait of herself which won her a prize in the Pittsburgh Art Show.

They traveled around the country as a family to see the landmarks and National Parks of the nation and later she and husband Tom would visit many parts of the world together. When they were home, they enjoyed golfing, gardening, and Grandchildren.

Her final three years were spent living in her home with her daughter Lynda and husband Bill. Those years, especially important through COVID, were such a blessing. Bea loved her IPad, looking through Facebook, and playing a word game with opponents all over the world. She could chat to her fellow players and enjoyed the banter it created. We puzzled almost every evening, had fun decorating and celebrating all the holidays together, and just simply enjoying each other's company.

Additional visitation will be from 10 AM until the time of funeral services at 11 AM on Monday, November 29, 2021, at the funeral home, with Kelli Connolly officiating.

Contributions can be made in Bea's memory to Orphans of the Storm, PO Box 838, Kittanning, PA 16201.

Arrangements are being handled by the Bauer Funeral Home and Cremation Services, Inc.