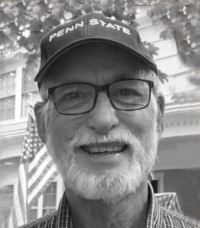 He was born in Punxsutawney, PA on November 3rd, 1950, the son of the late Clifton Ray Bowser and Helen Louise (Harman) Bowser. His family moved to Erie, PA two years later. Jimmy attended Harding Elementary School, and graduated from Strong Vincent High School in 1968. In 1973, Jim received his undergraduate degree in Environmental Resource Management from Penn State University, and his Master of Science degree in Environmental Pollution Control from Penn State in 1974. In 1983, Jim further attained a Bachelor of Science degree from the University of Florida. He then went to work for the City of West Palm Beach in 1974 as the Administrative Assistant to the Director of Engineering. From 1983 until 1986 he was a Project Manager for Robert H. Miller and Associates; in 1986 he became the Palm Beach Town Engineer; a position he held until his retirement in 2013. He continued to consult as an engineer until his death.

He is survived by his two sisters, Diana Blandi, of Erie, PA and Karen Schenley (William), of Merritt Island, FL. He is further survived by his step-son, Jon Carlson, his two step-daughters, Elyse Vasile and Kayla Wildenthaler and their children. Also, many, many cousins, especially Sid Himes (Cindy) who was like a brother to Jim.

Jim was happiest when he was outdoors, whether that be hiking, fishing, snowmobiling, maintaining forest trails or building shelters and signs for the trails. He loved the rivers, streams, brooks and "cricks" of Florida, but his heart and soul belonged to the hills of Central Pennsylvania. He had a cabin in Coudersport, PA, off Susquehannock Trail, on Bowser Trail. He loved to fish anywhere - streams, lakes or the ocean. He was a lifelong fan of the Pittsburgh Steelers, Penguins and Pirates. Jim was mentor to so many young people who looked up to him. He will be missed by so many people.

Funeral services will be private.

Interment will be in Smicksburg Lutheran Cemetery, Smicksburg, PA.

"And into the forest I go, to lose my mind and find my soul" James Bowser.
print this page