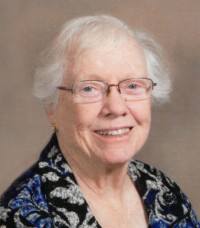 Mary Donnan Baker was born in Coraopolis, PA on December 17, 1935, to Hugh and Isabella Cairney Donnan. Shortly thereafter her family moved to Edgeworth where she attended The Edgeworth School. She graduated from Sewickley High School in 1953. Throughout her youth Mary was an active member of the Sewickley United Presbyterian Church and played the clarinet in the Sewickley High School Band. Mary attended Allegheny College where she met her future husband and graduated with a BS from the University of Pittsburgh School of Nursing in 1958.

They moved to Elderton in 1966, where Mary worked for Family Counseling as a traveling psychiatric nurse, and she was active at St. John's Lutheran Church, Kittanning with choir, social ministry committee, Sunday School, and the women's circle.

While in Morgantown, WV, she was on the faculty of the West Virginia University School of Nursing as a supervisor of the visiting psychiatric nursing trainees.

After hurricane Agnes (1972), realizing that people were waiting weeks to find out whether their water was safe to drink, Mary and Frank, along with Robert and Sheila Alico, formed the EcoTech lab for water testing in 1973. Mary was the Office Manager for over 30 years.

Mary's volunteering and philanthropy grew out of a deep belief in the Golden Rule. Mary served on the Health Systems Agency for Regional Comprehensive Health Planning activities. She volunteered with Habitat for Humanity through mission trips to Haiti, home builds with Jimmy and Rosalynn Carter, and a family build in Coahoma, MS. She also helped to establish local chapters of Habitat for Humanity in Armstrong County, Indiana County, and the IUP campus. In 2015, Frank and Mary were the recipients of the Lutheran SeniorLife Excellence is Ageless award for exemplifying Lutheran SeniorLife's philosophy of Abundant Life and inspiring others through lifelong achievement and excellence.

The family expresses their deepest gratitude to the heroes of the hospice program through Lutheran Senior Life VNA, as well as all of the healthcare providers who worked with Mary prior to her hospice care.

Memorial services will be on Saturday, July 31, 2021, at 3 p.m. with prelude and pictures at 2:30 p.m. at St. John's Lutheran Church, 218 N. Jefferson St., Kittanning, PA 16201, with The Rev. Carl A. Johnson presiding. Family and friends are invited to the visitation from 1:30 p.m. to 2:30 p.m. and an evening meal following the service. In lieu of flowers, memorial contributions can be made to St. John's Lutheran Church and marked for the Memorial Fund or to the ACCF-Baker Habitat for Humanity Fund at 220 S. Jefferson St., Kittanning, PA 16201.