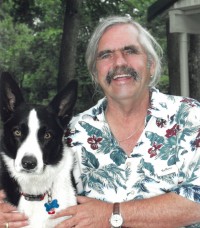 Larry W. Johns, 77, of Kittanning, PA, passed away on Wednesday, Jan. 6, 2021 at Allegheny General Hospital after a brief health battle.

He was born in Kittanning to Herman Johns and Gloria (Pepler) Moffatt on Dec. 25, 1943 and proudly shared his birthday with Jesus and Jimmy Buffett.

Larry spent his childhood in Kittanning surrounded by his close family. He graduated from Kittanning High School in 1961 and then moved to Chicago and attended technical school. In 1963, Larry honorably served his country in the U.S. Airforce during Vietnam. He was a nuclear weapons specialist stationed out of Montana and was deployed overseas to Okinawa.

After Vietnam, Larry settled in Ohio where he sold cars and then insurance. He then moved to Florida and was a painting contractor, painting many large horse farms. During that time Larry found his love of photography taking pictures of racing horses and even had some published in horse magazines. Upon returning to Kittanning, he opened his own photography business in 1990, Larry Johns Photography and captured countless smiles and momentous occasions in his 30+ years of photography. He took great pride in providing lasting memories to his customers, many whom became friends. He was incredibly giving and supportive to all of the local sports and school organizations that he photographed and always stressed the importance of the organizations and the services they provided for the youth in our community. Larry was widely known for his famous 1..2..3 when snapping a photo and the kids he photographed always loved to count along with him as the shutter fired. He was joined in business by his sidekick, Kelly Grabiec and for 18 years they worked side by side providing photography to the community. Kelly will be carrying on his legacy as he wished, by continuing his business.

Larry was an avid outdoorsman and enjoyed both hunting and fishing. He especially enjoyed using a muzzleloader and a flintlock. He loved spending his free time at his camp in Tionesta where he had made close friends with his neighbors there.

Larry was a devoted dog dad to his Border Collie babies, Rocket and Annie, and is now joyously reunited with his treasured loyal companion Max whom he lost this past year at the age of 16. Max never left Larry's side and the two of them went on countless adventures through the years providing Larry with many happy moments and memories.

Larry is survived by his loving wife, Mary (Lefchik) Johns who danced into his heart 32 years ago. They were married on Apr. 7, 1990 between the first day of trout season and spring turkey. He is also survived by his sons, Michael W. Johns of Chiefland, Fla. and Patrick W. Johns and wife, Megan of Jacksonville, Fla.; a daughter, Laurie Griffen and husband, Larry of Shelby, AL; eight grandchildren; seven great-grandchildren; and a special niece, Jessica Bure Martin, who he helped to raise.

Larry was preceded in death by his parents; a son, Gregory W. Johns; and a brother, Harry Lee Johns, who passed away on Nov. 21, 2020.

The family will plan a celebration of Larry's life when times are better.

Memorial contributions can be made in Larry's honor to a local youth or sports organization of one's choice or to Orphans of the Storm, PO Box 838, Kittanning, PA 16201.