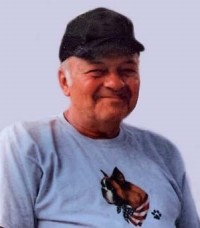 At the age of 15, Ron's father, Merle, put him in the driver's seat of a Single axle truck. He drove various makes and models for the next 62 years. Ron retired from driving truck in 2017. Ron and a few of his friends built a stock car in 1965. Car #26 started Ron's racing career. He raced until 1984, but racing would forever be in his blood. His passion for racing didn't stop when he got out of the driver's seat. Ron and Pat would spend many hours sitting in the grand stands at various tracks. When it came to being at the races, nothing stopped Ron.

Ron loved being around his family especially if it involved a campfire and hot dogs. Conversation with this family primarily revolved around trucks, racing, and his beloved boxers which were Ron's best friends.

He was preceded in death by his parents; his first wife, Ruby; and infant brother, Rodger McIntyre.

Additional visitation will be held from 10 AM until the time of funeral services at 11 AM on Thursday, Jan. 9, 2020, at the NuMine Bible Fellowship Church, 1359 St. Rt. 1042, NuMine, PA, with the Rev. Justin Lamison officiating.