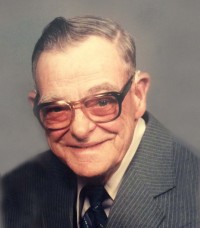 Jim served in the US Army during World War II. He worked as a nuclear waste tank operator for the Balbcock & Wilcox plant in Apollo. He worked for many years at Woody's Hardware in Elderton where he was the service technician. He was often called to help friends and neighbors for service in almost every household repair. Jim was a member of the Church of God at West Lebanon where he formerly served as an usher. He was also a longtime member of the Burrell Township Fire Department and the Spring Church Grange. He was also a very talented carpenter and mason. Jim enjoyed gardening and woodworking in his free time.

Jim was preceded in death by his parents; his loving wife, Nellie Kathryn King, whom he married March 29, 1952 and who passed away on March 15, 2007; a daughter, Betty Jean Meyer; a brother, William Blaine King and a sister, Twila Clever.

Friends will be received from 12 p.m. until the time of the Funeral Service honoring Jim's life at 3 p.m. on Saturday, Dec. 21, 2019, at the Clark Chapel of Bauer Funeral Home, Inc, 238 S. Main St., Elderton, Pa. with Pastor John Mark Henry officiating.

Interment will be in the Mt. Union Lutheran Cemetery, Shelocta, PA.

Arrangements are being handled by the Clark Chapel of the Bauer Funeral Home, Inc.