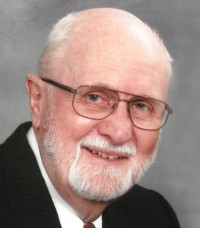 Donald graduated from Huxley High School and from the University of Iowa with a Bachelor's Degree in Accounting. He retired in 1981 after 27 years with the accounting department of Ford Motor Company, working in Iowa, Oklahoma and Michigan. He was a skilled woodworker and exceptional handyman. He was instrumental in starting the first ELCA Lutheran Church in Oklahoma City.

Donald was an Iowa farm boy who struck out on his own and had a successful family and career. He has resided in the Butler Area for the past 20 years and was a member of St. Mark's Lutheran Church of Butler. In his younger years, he was active in the Boy Scouts of America with his sons. While in Colorado, he enjoyed hiking, bicycling and cross country skiing. He also enjoyed traveling domestically in his motor home. There were many cherished memories of vacations to Hawaii and Europe with his family.

He is preceded in death by his parents; and one sister, Ireta Trusheim.

Per the family's request, services will be private.

Inurnment will be in the Palestine Cemetery, Huxley Iowa.

Arrangements are being handled by Bauer-Hillis Funeral Home, Inc.

To send a condolence to Donald's family, visit www.bauerfuneral.com.