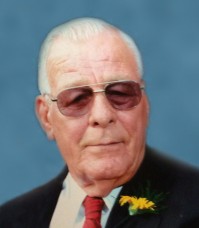 Harvey R. Frailey, 88, of Shelocta, PA, passed away peacefully on Saturday, April 27, 2019, at his home surrounded by his family.

Harvey was a member of the Christ Lutheran Church and honorably served in the U.S. Army during the Korean War. He worked for Agway in Indiana as a HVAC technician until his retirement in 1993.

He enjoyed riding his golf cart while attending to his garden and liked helping his wife, Virginia, can their home grown vegetables. Harvey could fix almost anything, and loved helping all of his family build their homes. He liked to fish and he had a special place in his heart for his cat, Sammy. He will truly be missed by his family and friends.

His memory will be cherished by his loving wife, Virginia (Fisher) Frailey whom he married January 24, 1953; three daughters, Janice Miller and husband, Terry, of Ford City, Linda McKissick of Shelocta, and Karen Clark and husband, Vernon, of Ford City; five grandchildren, Kristi Berthold and husband, Jesse, Tyson McKissick and Brandi Chmiel, Tara Hallof and husband, Aaron, Alyssa Hagofsky and husband, Brandon, and Garrett Clark and Julia Allen; four great-grandchildren, Addison and Chase Berthold, and Bryar and Kavin Hallof; two brothers, Delbert Frailey and wife, Elcy, and Ron Frailey and wife, Sandy, all of Shelocta; and many nieces and nephews.

He was preceded in death by his parents; a grandson, Kevin Harvey Miller; son-in-law, Greg McKissick; a sister, Mable Clawson and her husband, Gerald Clawson.

Additional visitation will be held at 10 a.m. until the time of funeral services at 11 a.m. on Wednesday, May 1, 2019, at the funeral home with the Pastor Vaughn Taylor officiating.

Interment will be in Elderton Cemetery, Elderton, PA, where military honors will be conducted by the American Legion Honor Guard.

Memorial contributions may be made in Harvey's honor to the Christ Lutheran Church, 205 Gastown Road, Shelocta, PA 15774.