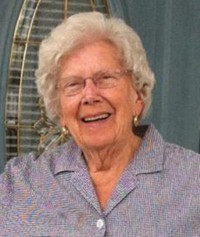 She was born September 2, 1924 in Whitesburg, Armstrong Co., PA, to Orville B. and Hazel (George) Elder.

Mary grew up in Whitesburg and attended Whitesburg United Methodist Church. Mary made the long commute to Kittanning High School to complete her education. She married Dawson H. Schall in Quonset Point, RI at the end of World War II, where Dawson served as a Seabee. Mary worked at the Armstrong County Courthouse for 20 years until retiring in 1986, and formerly was employed at the telephone company and the American Heart Association. She was a member of the Kittanning Eastern Star for over 50 years and enjoyed reading, dancing, horses and boating on the Allegheny. Mary spent many winters in Okeechobee, Florida. She loved traveling and had fond memories of her trip to Alaska. Mary's family is thankful for the superior care she received at the River Cliff facilities in Kittanning and Concordia Lutheran Ministries in Cabot.